An action-packed roller-coaster account of a life spiralling out of control featuring wild women, gangsters and a mountain of drugs

Shaun Attwood arrived in Phoenix, Arizona, a penniless business graduate from a small industrial town in England. Within a decade, he became a stock-market millionaire. But he was leading a double life.

After taking his first Ecstasy pill at a rave in Manchester as a shy student, Shaun became intoxicated by the party lifestyle that would change his fortune. Years later, in the Arizona desert, Shaun became submerged in a criminal underworld, throwing parties for thousands of ravers and running an Ecstasy ring in competition with the Mafia mass murderer Sammy ‘The Bull’ Gravano.

As greed and excess tore through his life, Shaun had eye-watering encounters with Mafia hit men and crystal-meth addicts, enjoyed extravagant debauchery with superstar DJs and glitter girls, and ingested enough drugs to kill a herd of elephants. This is his story.

Shaun regularly speaks to audiences of young people about the perils of drugs and the horrors of prison life.

We approach two drug dealers, lads about our age, twenty, skulking in a corner of a dark nightclub, skulls shaved.

“Can we get two hits of Ecstasy and two grams of speed?” my friend asks.

My fingers and legs start to shake.

“Here you go.” My friend offers our money.

The dealers exchange looks as if pondering whether to rob us. My body stiffens like plaster setting in a cast. The biggest snatches our cash. The other passes the drugs imperceptibly. They vanish. I worry about getting arrested for possession. It’s 1989, and drug deals rarely end happily on my TV. Bracing for undercover cops to grab us, I spin my eyes around the room.

My friend yanks my arm, rushes us to the toilets, locks us in a stall. He reveals two white pills and speed meticulously wrapped in little paper rectangles. “You put the Billy Whizz in your drink,” he whispers, tipping white powder into a bottle, “and neck the White Dove.”

Committing to do drugs is one thing, taking them another. Will I be hooked for the rest of my life? My fear of ending up in an ambulance and my parents finding out recedes as the thrill rises. I can experiment a few times, have fun, quit whenever I want…

I dump the speed into a bottle of Lucozade, pop the pill, take a swig, and gag on the chemical aftertaste. Oh my God! What happens now? I turn to my friend. “How long before I feel it?”

My friend, tall, blonde, pointy-nosed, is a fellow Economics student at Liverpool University. Raves are making headline news, so I’m at The Thunderdome in Manchester to find out what all the fuss is about. The bare square room with a stage at the front is unimpressive. Only a few people are dancing to music that makes no sense. Repetitive beats and beeps like signals from outer space. Most of the ravers are stood by the walls, gazing at the dance floor as if expecting an elephant to materialise. Nightclubs intimidate me. I feel shy in them. I don’t dare talk to anyone other than my friend. Convinced I’m about to overdose – die even – I spend the next half-hour checking my pulse, timing the beats per minute.

An expression blossoms on my friend’s face as if he’s having an orgasm. Exuding the kind of bliss seen on angels in medieval paintings, he can’t stop smiling or stand still. He asks me to dance. I haven’t enjoyed dancing since the days of punk rock. I say no. He bounces off. I regret letting him down. Frustrated at the drugs for not affecting me, I finish my drink. I walk towards the bar. My knees buckle, and the strength drains from my legs. I try to soldier on, but wobble as if on sinking sand, and have to sit down.

Someone kicks me. “Sorry, mate.”

Staring up at a happy raver in baggy jeans, I break into a smile that wraps around my face, and refuses to go away. There’s a strange feeling on my back. Has a bug landed there? I reach over my shoulder to slap it off. No bug. It’s the sensation of my T-shirt against my skin. Running my fingertips up and down the nape of my neck feels like feathers are tickling my skin. Or are my fingers melting into my skin? A sensation so pleasurable, I massage myself. Breathing feels different, too. Each inhale pulses pleasure through my body as if I’m getting fondled by an invisible woman. Smiling at the forest of legs growing around me, I remember going to the bar – but that doesn’t matter anymore, nor does losing my girlfriend, the engine problems with my car, the calculus-heavy five-thousand-word balance-of-payments essay due on Monday morning… The high is demolishing every worry in my life, leaving me no choice but to be happy with the way things are. 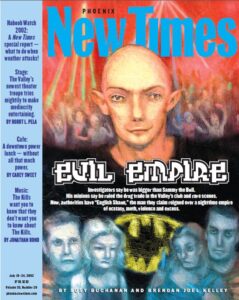 The club fills. Time is irrelevant. Ravers are everywhere, a kaleidoscope of coloured clothing. Hugging, grinning, grooving, jumping happiness machines, raising the temperature with their body heat. My desire to join them gains strength – it’s just a matter of time. My high keeps rising, interrupting the flow of my thoughts, making my eyeballs flutter upwards as if under the influence of the moon’s magnetic pull. Hot, I want to take my T-shirt off – pondering the urge melts it away. The music and beeping noises are making sense now. They’re saying, Get off your arse and dance!

I’m bobbing my head, playing the piano on my thighs when my friend finds me. He smiles. Our eyes sparkle in recognition of each other’s highs.

I follow him into the thicket of bodies. He starts to dance. I jump from side to side, trying to find my groove, and settle into the same rocking motion as everyone else. I’m dancing, loving dancing, surprised by how natural it feels, experimenting with moves copied from those around me. My heart is beating hard and in time with the boom-boom-boom blasting from giant black speakers. My arms are jerking up and down as if throwing boulders at the ceiling when everyone stops dancing. Has someone turned the music off? No. Only the beat has stopped, leaving a soothing sound. Hands shoot up. Whistles blow. A machine hisses out smoke. A black woman sings with beauty bordering on spiritual, tingling my skin all over. Piano notes are struck. We sway, our fingers reaching into the beams of the sun laser. An air horn sounds. Bracing for a lorry to plough through the club, I jump. Such an absurd notion makes me laugh aloud. The soulful woman’s voice fades as DJ Jay Wearden mixes in a Guru Josh track: 1990’s… Time for the Guru… A saxophone solo sends a tremor through my body. My eyeballs shiver. In the square room that had bored me earlier, I feel as if I’m at one with God. I never want the party to end. 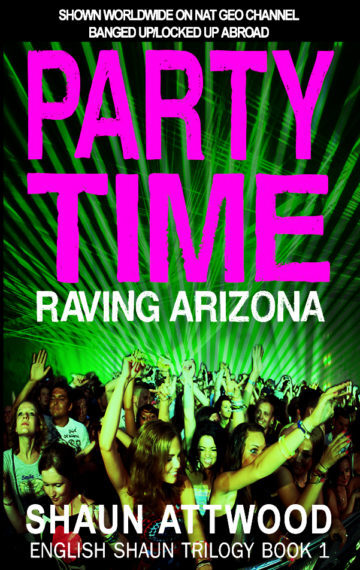