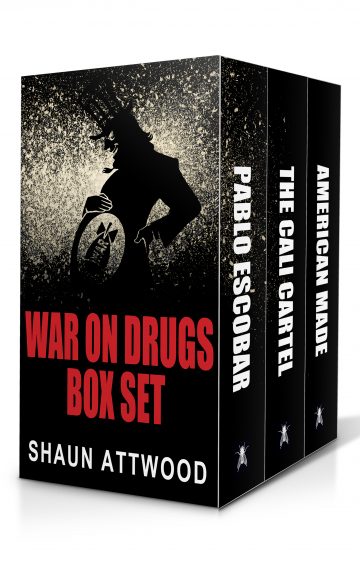 Three fast-paced true-crime stories packed into a blistering exposé of the War on Drugs.

With 688 pages featuring deadly Colombian drug lords and the CIA, these three books have hundreds of five-star reviews on Amazon and Goodreads.

The mind-blowing true story of Pablo Escobar and the Medellín Cartel beyond their portrayal on Netflix.

Colombian drug lord Pablo Escobar was a devoted family man and a psychopathic killer; a terrible enemy, yet a wonderful friend. While donating millions to the poor, he bombed and tortured his enemies – some had their eyeballs removed with hot spoons. Through ruthless cunning and America’s insatiable appetite for cocaine, he became a multi-billionaire, who lived in a $100-million house with its own zoo.

PABLO ESCOBAR: BEYOND NARCOS demolishes the standard good versus evil telling of Pablo’s story. The authorities were not hunting Pablo down to stop his cocaine business. They were taking over it.

THE CALI CARTEL: BEYOND NARCOS

From the ashes of Pablo Escobar’s empire rose an even bigger and more malevolent cartel. A new breed of sophisticated mobsters became the kings of cocaine. Their leader was Gilberto Rodríguez Orejuela – known as the Chess Player due to his foresight and calculated cunning.

Gilberto and his terrifying brother, Miguel, ran a multi-billion-dollar drug empire like a corporation. They employed a politically astute brand of thuggery and spent $10 million to put a president in power. Although the godfathers from Cali preferred bribery over violence, their many loyal torturers and hit men were never idle.

Set in a world where crime and government coexist, American Made is the jaw-dropping true story of CIA pilot Barry Seal that the Hollywood movie starring Tom Cruise was afraid to tell.

Barry Seal flew cocaine and weapons worth billions of dollars into and out of America in the 1980s. After he became a government informant, Pablo Escobar’s Medellin Cartel offered a million for him alive and half a million dead. But his real trouble began after he threatened to expose the dirty dealings of George HW Bush.

AMERICAN MADE rips the roof off Bush and Clinton’s complicity in cocaine trafficking in Mena, Arkansas.